Fleur calls me Honey. I am sure it started as parroting my wife. But, she does it now as a replacement for Dada. Well, when she wants my attention.

Actually, you know what? That latter is similar in approach to how the wife calls the teen. Booooboooooooooooo!

Fleur has taken to calling the male Little People toy in the toy house “Honey” too. I need to observe the name she has for the female. Curious if she has a name yet. I am also curious if she will call other adult males Honey. (And their reaction to it.)

The first toy I noticed she named was an annoying unicorn that makes noise. We never named it because, honestly, we hoped it would disappear (burn in a fire). Fleur named it Lady. Same as a dog down the street she loves to visit.

I ponder often the psychology of names. 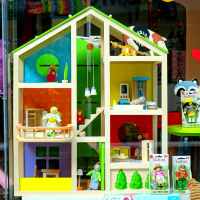